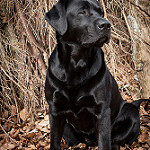 Have you ever been on a duck hunt where you did not want to shoot a duck?? No?? Well I have and I don’t think you are going to blame me….It was late November and your typical bluebird, windless, slow day. Rog, Erik and I checked into the refuge about mid morning. The average was running less than a bird per hunter but hope springs eternal and we thought maybe we could get a few mallard working back into the tules in the afternoon. With us this day was Rog’s Black Lab, Cash. I knew Cash was a great pheasant dog but when it came to ducks–we’ll just say he was a great pheasant dog. However,  as far as I am concerned, any dog nose out in the marsh is better than nothing!!

It did not take us long to load all the gear into the cart and put on our waders .I usually hate walking out to the marsh on a warm day–especially when no birds are flying–but if you have the right mindset, it is not so bad.

We finally came up to the island we were going to set up on for the afternoon, so I dropped off my pack and gun and made my way back out into the water to throw out some decoys.  Just as I started throwing a few out, I heard a deep, low, guttural yell…”CASH, NO, CASH NO! It was my friend Roger imploring Cash not to do something.  There it was again…CASH, NOOOOOOOO! (This many years later, I can still hear it in my head late at night) I wondered: what could Cash be doing–there is not that much trouble a dog could get into on an island in the middle of the duck marsh??

I made it up on the island and found Rog with a pained expression. “What is going on” I wondered. Rog laid it out for me…Apparently other hunters had used the Island that morning and one of them had an “issue”, as in “when you gotta go, you gotta go”(and I am not talking about taking a leak!).  Cash, being the opportunistic field dog that he is found the remnants of said “issue” irresistible…toilet paper and all. Now,  you cant fault a dog for finding a meal in the wild and indulging but in this case–it was just WRONG on several different levels.

For the rest of the afternoon, Cash, the happy go luck lab that he was…would come around every so often looking for a scratch under the chin or to lick a face.  I made it quite clear to him he was NOT to come Anywhere. Near. Me!!! Maybe it was my mind playing tricks on me or maybe I was downwind of the “issue” but I swear I could smell Cash from 10 feet away.

Then it occurred to me…what if I shot a duck??  What if a big ole greenhead came bombing into the decoys??  Did I really want Cash bringing it back to me??  The dilemmas  we duck hunters have to deal with from time to time!

You will be relieved to know that I was never faced with that difficult decision on whether to shoot or not–no ducks came by that afternoon. Yes, it was one of those rare instances that I was OK with no ducks. I can say the best thing about that hunt is that I did not have to ride home with Cash…that honor went to my friend Rog!!

1 thought on “To shoot or not to shoot…”